With the Premier League fresh off an international break, Infogol’s Jake Osgathorpe takes a look at fight for survival. Who will be relegated? He uses expected goals (xG) to answer.

The end of the Premier League season is rapidly approaching, and the fight for survival is hotting up.

Fourth-bottom Everton and basement boys Norwich are separated by just eight points, while all of the bottom four have games in hand over Leeds (16th) and Brentford (15th).

So, let’s take a look at each teams chances of survival/relegation according to the Infogol model.

Bottom side Norwich look set to continue their yo-yoing ways and make a swift returnt to the Championship.

Dean Smith’s side have a huge task on their hands if they are to stay up this season, and their underlying process suggests that is nigh-on impossible.

The Canaries of 21/22 are set to be relegated as the worst team Infogol has seen since data collection began in 2014.

No surprise, then, that the Infogol model has them at 99.9% for relegation.

A weekend visit to a Brighton team who have lost six straight should represent an opportunity, but it could also be curtains.

Watford are in a better position than Norwich, four points better off, but Infogol still expects them to be relegated.

Things haven’t picked up quickly enough under Roy Hodgson, and having played two games more than both Burnley and Everton leaves them in a precarious position.

Infogol gives them an 85.7% chance of dropping back into the Championship so the 1.241/4 on the Exchange may represent value despite being a short price.

Their underlying process has improved under Hodgson, now averaging 1.06 xGF and 1.42 xGA per game, but their run-in looks tough, having to play all of the top three plus Leicester and Crystal Palace (a).

They start that run with a trip to Anfield to face a Liverpool side who have averaged over 3.0 xGF per home game this season. 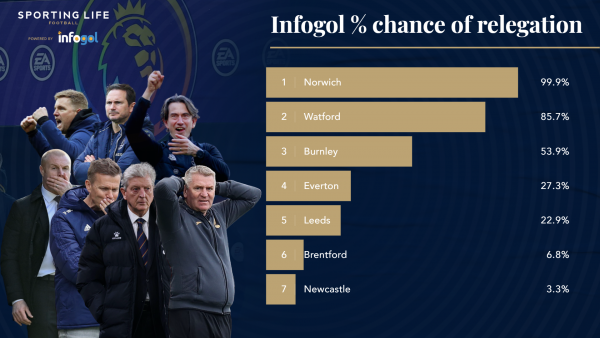 Burnley on the brink?

Burnley have defied the odds for a number of season now, but this is the first time that there is a real feeling they could drop back into the second tier.

Sean Dyche’s side are second-bottom and four points from safety having played the same number of games as fourth-bottom Everton.

They are rightly 19th in the table, ranking second-worst in Infogol’s xG table which is based on expected points (xP).

Victories for Everton and Leeds prior to the international break saw Burnley’s chance of relegation increase beyond a coin flip, with the Clarets now 53.9% to drop.

They have managed just three wins all season, and their fixtures don’t look overly appealing, with key head-to-heads against Norwich and Watford both away from home.

They restart after the break with a home game against champions Manchester City… best of luck in that one.

Everton’s win over Newcastle before the break was much-needed as they bid to avoid the drop to the second tier for the first time since 1951.

That victory put some daylight between themselves and Watford, and moved them four points clear of Burnley.

The fact that the Toffees have two games in hand over the Hornets is huge, particularly in these simulations, while the cushion to Burnley also contributes to the fact Infogol has them at 27.3% to go down, almost exactly in line with the Exchange.

Things can change fast down at the bottom though, with a few decent results for rivals coupled with losses for Everton capable of swinging that probability drastically.

And losses for Everton look more likely than draws or wins when looking at their underlying process under Frank Lampard. 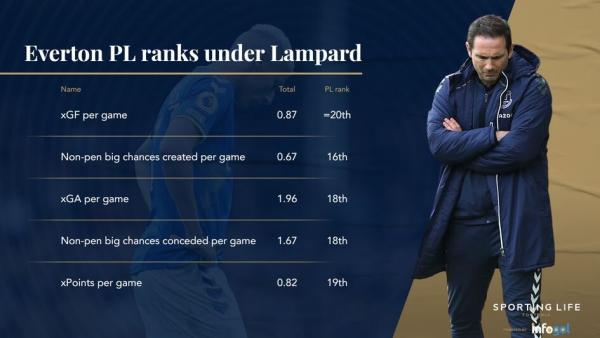 They rank among the bottom three in the league on major metrics (xGF, xGA, xP) since his arrival, being statistically worst than under Rafa Benitez.

Away form could be crucial to the Toffees, who’s only two games remainig against teams in the bottom five come on the road (Burnley, Watford).

The fact that they have lost their four away games under Lampard by an aggregate score of 14-1 is a cause for concern. West Ham should be licking their lips ahead of Sunday.

Leeds on the up

Successive wins have pulled Leeds seven points clear of danger, but the fact that they have played more games than the teams below them means they aren’t yet out of trouble.

Fortunately for the Whites, performances since Jesse Marsch took charge have been impressive, with Leeds averaging 2.17 xGF and 1.12 xGA per game against three mid-table teams (LEI, AVL, WOL) and bottom side Norwich.

Continue performing like that and Leeds’ chance of relegation (22.9%) will decrease rapidly.

A home game against Southampton on Saturday represents a great opportunity to put even more daylight between themselves and the bottom three.

Magpies and Bees as good as safe

Newcastle’s remarkable turnaround under Eddie Howe cannot be understated, and a nine-game unbeaten run that featured six wins has seen their relegation chances diminish to just 3.3%.

Their underlying process in that time (1.42 xGF, 1.24 xGA per game) is what we would come to expect from a top-half team, meaning if they sustain that same level, they won’t get sucked back into the mire.

Many were fearful for Brentford after a run of one point from eight matches, but by just inspecting that run you could tell there was no reason to get carried away.

The Bees faced Liverpool, Man Utd, Wolves, Man City and Arsenal in that run – teams who are all in the top eight.

They bounced back to win successive six pointers against Burnley and Norwich to put themselves eight points clear of the bottom three.

Thomas Frank’s side have performed like a top half team according to the underlying metrics, so if they continue in the same manner will be just fine – as the 6.8% chance Infogol gives them of relegation suggests.

It does look as though we are set for a straight shootout between Burnley and Everton for the final relegation spot, and the pair are due to meet at Turf Moor next Wednesday for a huge showdown.