Newcastle shaping up as a threat next season

Eddie Howe – admittedly with help in the January transfer window – has dragged Newcastle to safety.

They hit the magic 40-point mark in midweek with a win over Crystal Palace – their third straight overall and sixth straight at St. James’ Park.

Nine wins from their last 12 have propelled them well clear of the drop zone and out of the top-10 on goal difference only.

The turn around has been drastic, and it has been deserved, with the underlying numbers posted by the Magpies in-line with what we would expect to see from a team who finishes between seventh and 10th.

In fact, since Boxing Day only the current top six – who also happen to be the traditional ‘big-six’ – have posted better a expected goal difference (xGD) per game and expected points (xP) per game figures than Newcastle.

They have recruited smartly in their first window since the takeover, and the signs are there that, if they can do so again in the summer, Newcastle could be challenging for Europe next season.

Norwich are next up for Howe’s men, and a 10th win in their last 13 looks highly likely if they can maintain the same levels, meaning the 2.18 available on the Exchange looks a tad too big.

Leicester (1.91) Brighton (2.03), Leeds (2.04), and Southampton (2.14) have all gone off at a shorter price Carrow Road than what Newcastle are currently, and the numbers suggest this current Magpies team is better than all of those sides.

It is nothing new to learn that Liverpool are excellent at home, but the figures they are posting are simply mind-boggling.

The Reds, who dismantled rivals Manchester United in midweek, are posting an xGD per home game of +2.23.

That average is some 0.54 better than Manchester City’s average, highlighting just how dominant they are at Anfield. 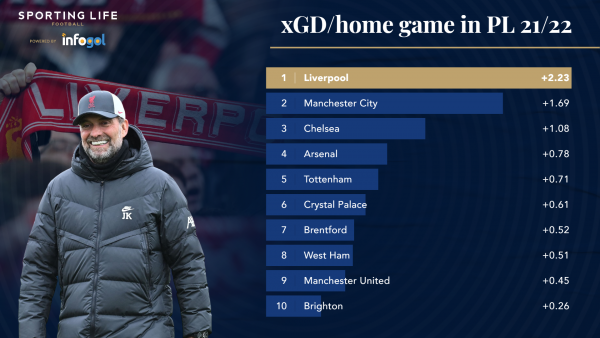 Since Infogol began collecting data (2014), we haven’t seen a home team as dominant as this current Liverpool side.

In terms of attacking process, Liverpool’s xGF per home game average of 2.92 also ranks as the best Infogol has ever seen.

Since data collection began, the best attacking team in home matches by season has always been Manchester City, with the previous high being 2.81 (MCI 18/19).

Statistically, this Liverpool team are the best and most dangerous home team we have ever seen.

That should scare city rivals Everton stiff ahead of Sunday’s match-up.

Not only are the Reds a free-flowing chance-creation machine, especially at Anfield, but the Toffees are utterly woeful on their travels under Frank Lampard, allowing 2.56 xGA per game across his five road matches.

It could be a long afternoon for Everton, and 1.90 about Liverpool -1.75 on the Exchange’s Asian Handicap appeals.

If the Reds win by three goals or more we get a full winner, and we also get a half-win should Klopp’s side win by exactly two goals.

While they managed to score three times last weekend, the goals came from chances equating to just 1.56 xGF – against Norwich.

They followed that tame effort up against the league’s worst defence by putting up just 0.12 xGF against title challengers Liverpool… 0.12.

Over their last six games, United’s xGF average is at 0.93 – simply not good enough.

The highest their xGD per game for a full season has ranked since 2014 is fourth. 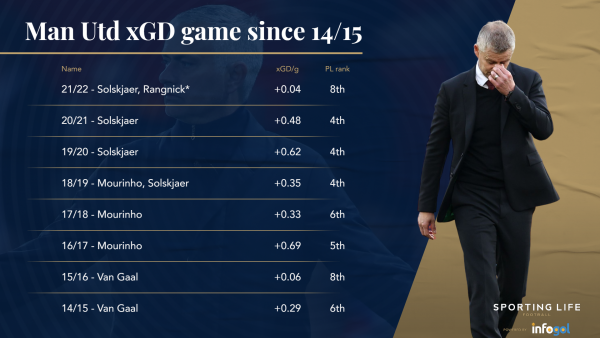 This is now a club that have become regulars at battling for the top four simply because their underlying process isn’t good enough.

That comes from a number of things; club structure, culture, recruitment, managerial choices, ownership – the list could go on.

Overall, the United ship hasn’t been pointing in the right direction since Ferguson retired, both on and off the pitch.

Erik Ten Hag needs to be afforded more time than his predecessors to improve things. He is a talented coach, but the fix will not happen overnight – we are talking five years plus before United can realistically even challenge for a title.

Maybe longer if Klopp and Pep stick around.

Ralf Rangnick has the unenviable task of having to see out the season with a squad of players who look disinterested, and there is a possibility the ‘world’s biggest club’ tanks the remainder of the campaign to avoid European football altogether.

Let’s face it, they aren’t going to finish in the top four, and with the way they are playing, will the be able to hang onto sixth place? If not, do they really want to be playing in the Europa Conference League (no disresepect) next season – I doubt it.

Nonetheless, they travel to Arsenal as the meat in the sandwich of a tough three-game stretch (Liverpool away, Chelsea home), and the 2.14 about the home side looks a solid bet.

The Gunners rank as the third best home team in the divsion, while United have been torrid on their travels – allowing a whopping 1.83 xGA per game.

It really is a sorry state of affairs at United, and the club they face at the weekend are a few years ahead in their redevelopment – despite sacking their long-time manager (Wenger) five years later than the Manchester side (Ferguson).