Relegation strugglers on the up

Yes, you read that right. The teams fighting to avoid the drop ALL feature in this week’s HOT section.

Not so long ago it looked as though the relegation scrap was set to be a dull affair between three teams who probably all ‘deserved’ to go down, but now, we have three teams who all look good enough to stay up.

Everton have turned their fortunes around mainly thanks to their home form and performances, averaging 1.05 xGF and 0.99 xGA per home game, with results at Goodison Park moving them to within two points of safety with a game in hand.

That is a mid-table process, and deserves credit, but the reason the Toffees are on the inside of the relegation zone looking out is their away form, which remains a disaster (0.89 xGF, 2.44 xGA per away game).

If only they could replicate their home process on their travels, and they would be comfortably safe already. They face a potentially tricky trip to Leicester this Sunday.

They really are flying, and have another winnable game this weekend when hosting Aston Villa – a game that could see plenty of goals given the way in which the Clareys have been approaching games.

Burnley can be backed at a huge 3.15 on the Exchange to win that game, which appeals, as does the 2.14 available for Over 2.5 Goals.

That leaves Leeds, who are now the bookies – and Infogol’s – favourites for the drop despite picking up 11 points from a possible 18.

Defeat at home to Manchester City last weekend was expected, but the Whites had been unbeaten in five before that, and since Jesse Marsch was appointed Leeds have posted impressive underlying numbers (1.61 xGF, 1.45 xGA per game).

If they maintain the same levels, they will win more games than they’ll lose, and be sure to expect them to play Arsenal close on Sunday, with Leeds +1.5 Asian Handicap looking a play at 1.8.

It wouldn’t be a surprise given how well all three are playing (Everton mainly at home) that more than 40 points are required to survive, but given the schedule, Leeds do look the most likely to drop.

What a season it has been for Crystal Palace.

While the league position of 12th would just suggest it’s been another of the ‘same old, same old’, it couldn’t be more wrong.

Based on expected points (xP), Palace have been the seventh best team in the league this season, and the season-on-season improvement has been astronomical.

It’s fitting to discuss their upward trajectory this weekend given they welcome their previous manager, who was fortunate not to get them relegated.

Under Hodgson last season, Palace posted an xGD per game of -0.75.

This season under Patrick Vieira, that has climbed into the positive to +0.11.

That means that this season’s Eagles team is 0.86 xG better per game than last season’s. Over a full 38-game campaign, that would equate to Vieira’s side being around 32.7 xG better than Hodgson’s.

The league position may not suggest so, but this Palace team have made tremendous strides this season, building a platform to challenge for Europe next term.

This weekend, against Watford, the team with the sixth best home process (Palace) should prove too strong for their former coach and his new side, with Palace -1.0 Asian Handicap catching the eye at 2.4 on the Exchange.

Saints with the sandals on?

One team to oppose currently are Southampton.

Ralph Hasenhuttl’s side aren’t yet guaranteed a spot in the top flight next season, sat on 40 points, but they are finishing the season as if they are already mathematically safe.

The Saints, have won just one of nine, averaging a relegation-worthy 1.29 xGF and 2.12 xGA per game in that time.

They have been awful travellers this season (W3, D6, L8), which doesn’t bode well as they head to play a very good home team in Brentford this weekend.

The Bees can be backed at 2.26 to win that game, which should be snapped up.

The less said about Norwich the better

Despite being the bookies favourite for relegation at the start of the season, it’s still hard not to be a little disappointed in Norwich at the lack of fight they have shown.

They prop up every major metric, and what’s worst is that they look set to be relegated as the worst Premier League team Infogol has ever seen. 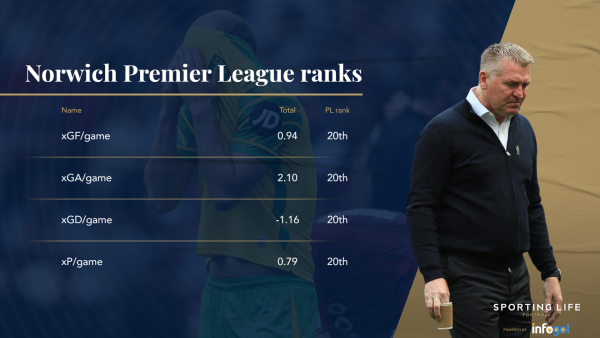 Hopefully that highlights just how pitiful the Canaries have been this term.

They welcome West Ham on Sunday, and while team news will be important from a Hammers perspective, the 1.85 about an away win seems huge given the state of Norwich.