There’s a bumper Thursday night of football starting with Sevilla v West Ham in the Europa League then Premier League action featuring Norwich v Chelsea. Get the best bets from our experts…

Kevin Hatchard says: “Sevilla have an excellent home record, including wins over Atletico Madrid, Wolfsburg, Betis and Villarreal. However, if you’re looking for a reason to support West Ham here, it’s worth noting that Sevilla’s home form in the Champions League this season was poor. They were beaten by Lille, drew with Salzburg and beat a Wolfsburg team that has been well below its best this term.

“Although West Ham aren’t exactly producing a firework show in every game at the moment, they do usually find the net at least once. Moyes’ men have scored in 13 of their last 15 competitive matches, including six of the last eight away games.

“Sevilla have played four home games in European competition this term, and have only kept one clean sheet, and they gave up plenty of chances in that draw at Alaves at the weekend.

Both Teams To Score is trading at evens here, and I think that’s overpriced. Sevilla have scored in every home match this season, so in my eyes you’re effectively getting a pay-out at evens on West Ham to score a goal.”

Dan Fitch says: “After a slow start Tammy Abraham is really starting to deliver for Roma. He’s scored 20 goals in 36 games for the Italian club, which includes six goals in seven Conference League appearances. With Vitesse conceding 20 goals over their last eight games, Abraham looks value to score at 2.77/4.”

Back Abraham to score for Roma against Vitesse Arnhem at 2.77/4

Ben Steele says: “If Newcastle are to keep their winning run going the key part of their gameplan will be shutting down Ralph Hassenhuttl’s main man. Chelsea loanee Armando Broja has made quite the name for himself this season with six league goals (nine in all competitions) but star of the show is, undoubtedly, James Ward-Prowse.

“The England international has been superb again this term, scoring six times and providing four assists as well as a constant set piece threat. Arguably the best free-kick taker in the league, Ward-Prowse has scored in his last two games against Newcastle and is 7/1 to open the scoring.

“However, it is his set piece prowess that makes him a real threat to Eddie Howe’s side. The last three goals Newcastle have conceded have all come from set pieces, one was a Jamaal Lascelles own goal but add to that the goals scored by West Ham’s Craig Dawson and Brighton’s Lewis Dunk and that will interest Ward-Prowse and his teammates.”

Paul Robinson says: “The visitors are the marginal favourites for this clash, and I do have to agree with that. As mentioned, Leeds were much better against the Foxes, but they are on a losing run of five, and it’s hard to just suddenly turn things around.

“It becomes even harder when you are up against an in-form side, and that is what Villa are. They completely outplayed Southampton at the weekend, and the Saints headed to the Midlands on a seven match unbeaten run.

“Based on that, the 2.6413/8 for the away win is much more appealing than the 2.8415/8 on offer for a Leeds victory. The draw is trading at around the 3.65 mark on the Betfair Exchange, and that was the result when they met at Villa Park last month. That was a crazy game though, and Villa did kind of throw it away.”

A team on a run of three straight defeats doesn’t deserve to be odds-on so a lay of Wolves is the simple but practical way to go, according to our previewer.

Jamie Pacheco says: “A surprising defeat at home to Palace means it’s now three losses on the spin for Wolves.

“It’s a run that has probably deprived them of the right to dream about European football next year but assuming they finish around eighth place, it won’t be a bad season given they had a new manager coming in and a few changes to personnel on the field. The acid test will be as to whether they progress next season.

“What was odd about the last two defeats was that Raul Jimenez started both on the bench. He’s arguably their best player, the team is suited to playing with him as the target man and although he hasn’t reached the dizzy heights of two seasons ago, he’s still been decent this time round. 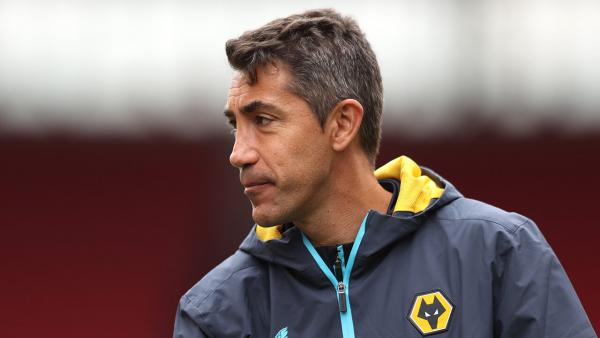 “So why the sudden decision to drop him? One match, fine. Maybe he needed a rest but it makes you wonder if something’s up. Or whether he’ll slot back into the side for this one. Wolves look a better team with him playing.”

Kevin Hatchard says: “While Xavi now has an embarrassment of riches in attack (a sign that football still doesn’t take financial problems seriously), he hasn’t yet been able to tighten things up at the back. Both teams have scored in 13 of Barcelona’s last 16 games. Goalkeeper Marc-Andre ter Stegen still looks well short of his best, and there are often lapses in concentration from his outfield colleagues. The goal conceded against Elche was a good example, as Pedri needlessly coughed up possession.

“So, can Galatasaray score a goal here? Well, their new coach Domenec Torrent certainly wants to play in an attractive, attacking style. Gala have scored 10 goals across their last five league matches, but the bad news is that they’ve leaked 10 in the same period. Gala are 12th in the Turkish Super Lig standings, remarkably just eight points above the dropzone. Torrent knows the scale of the challenge he faces on Thursday, as he was once Pep Guardiola’s assistant at Barcelona.

“You could back Both Teams To Score here at 2.35/4, but instead I’ll go for Over 3.5 Goals at 2.186/5. I think Gala can contribute to a highly entertaining game, but Barca’s quality and depth in attack (they had Adama Traore, Ferran Torres and Memphis on the bench at the weekend) will probably make the difference in the end.”