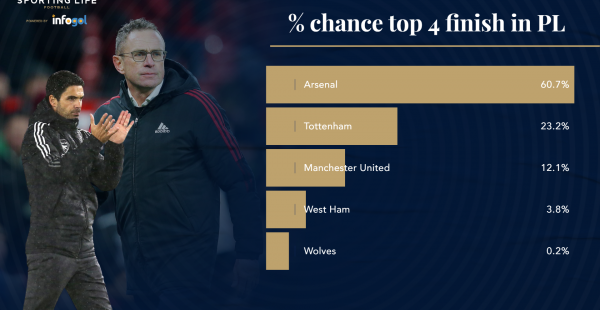 With a limited Premier League card this weekend, Infogol’s Jake Osgathorpe takes a look at the race for Europe. Who will finish in the top four? He uses expected goals (xG) to answer.

Everyone must know by now that Manchester City and Liverpool are certainties to finish in the top four.

The pair are embroiled in yet another fascinating title race with just one point between them heading into the international break.

Pep and Klopp have their sides performing at incredible levels, with their expected goal difference (xGD) per game the easiest way to see the gulf between them and the rest.

They are literally twice as good as everyone else in the league when it comes to game-to-game supremacy.

Given we are to be discussing teams percentage chances of top four or top six, we may as well divulge who the Infogol model has as favourite to win the title and by what margin.

Who will finish in the top four?

So that’s two out of the way, both have a 100% chance of a top four finish by the way, and a third near-certainty is Chelsea.

The Blues have a nine point cushion and a game in hand over fifth placed Manchester United, as well as a far better xG process than the chasing pack.

They are given a 99.9% chance of finishing the season in the top four.

That leaves one spot – most likely fourth – with the likes of Arsenal, Manchester United, West Ham, Tottenham and Wolves fighting it out.

The Gunners are in pole position.

They are in fourth with a one-point advantage and two games in hand over closest challengers Manchester United.

Infogol gives Mikel Arteta’s side a 60.7% chance of finishing qualifying for the Champions League. 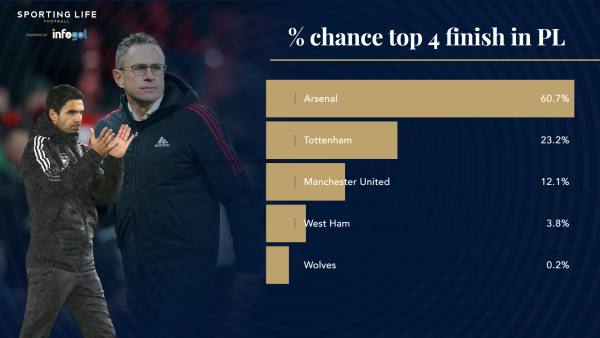 It won’t be easy, with Arsenal having six really difficult looking away games, starting with Aston Villa this weekend.

They also have to go to Crystal Palace, Southampton, Chelsea, West Ham and Newcastle, and with their away xG process far inferior to their home process, it will likely be these away games that will make or break the Gunners.

If it is any consolation after putting a dampner on things, we make Arsenal extremely likely (94.5%) to finish in the top six at the very least.

Spurs v West Ham a crucial game for both

Tottenham are next likely to finish in the top four according to the model, with a 23.2% chance.

They are three points behind Arsenal having played one game more, but they have a North London derby at the Tottenham Hotspur Stadium that could prove decisive.

If we are comparing run-ins, Spurs’s is much kinder than Arsenal’s. They have six home games out of 10 remaining matches, with their xG process at home under Antonio Conte very impressive (2.26 xGF, 1.17 xGA per game).

Another decisive game comes this weekend, as they host fellow contenders West Ham – though Infogol doesn’t really think they have much of a chance of finishing in the top four (3.8%), and makes them outsiders for the top six (42.0%).

The Hammers have fallen away of late, with performances not as good as at the start of the season, and this weekend’s clash is huge. 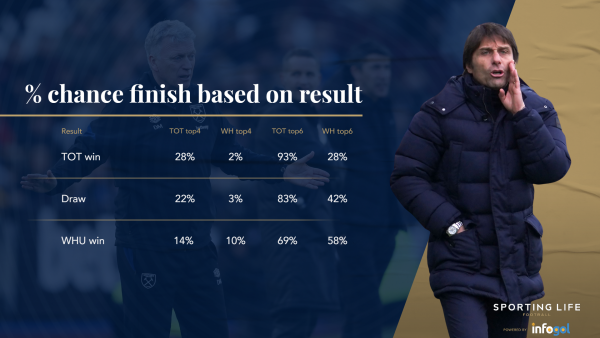 A Tottenham win in that game increases their top four chances by 5%, whereas a loss sees their chances decrease by 9%.

West Ham’s top four chances go from 3.8% to 10% if they win at Spurs, while a draw keeps things pretty much the same for both sides.

Ralf Rangnick’s Manchester United are a point behind Arsenal having played two games more, and are two points ahead of Tottenham having played a game more.

They need a lot to go their way if they are to finish in the Champions League places, shown by the 12.1% chance Infogol gives them.

United have to go to Liverpool and Arsenal, a game that could be key, as well as host Chelsea, along with some potentially sticky away games (Brighton, Crystal Palace).

Confidence is low in the camp, and performances haven’t been at a level that would make us sit up and take note.

Since Rangnick took charge, in early December, United have ranked behind Arsenal and Tottenham on the two major metrics – xPoints per game and xGD per game. 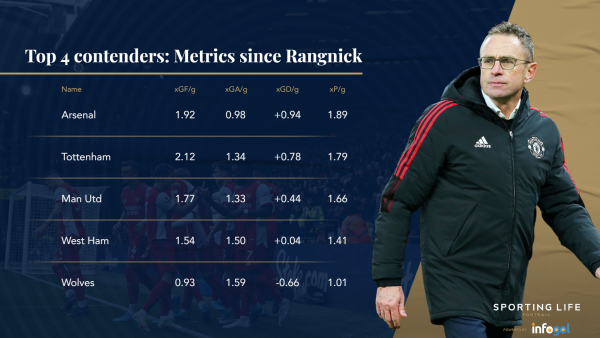 And, it has to be argued that during that time United have had an easier schedule than their top four rivals.

All-in-all, it looks a tough ask for United to get into the top four again this season, and it’s nigh on impossible for Wolves according to the Infogol model.

Bruno Lage’s side are five points behind Arsenal having played two games more, so would need a lot of help, and their underlying process hasn’t been anywhere near good enough to suggest they can sustain a good run of form.

It’s just the 0.2% chance the Old Gold cause a huge upset and gate-crash the top four, and unfortunately for Wolves, it’s just a 5.2% chance they finish the season in the top six.

As discussed in this column before, obviously football isn’t played on spreadsheets or by using algorithms.

It’s played on the pitch, but the underlying numbers we have available paint the clearest picture of who each team are and what we can expect to see should the remain the same.

Improvements in underlying process can be made, but through nearly three quarters of the season, we have a good handle on each team.

There will still be twists and turns, but fourth spot is Arsenal’s to lose.