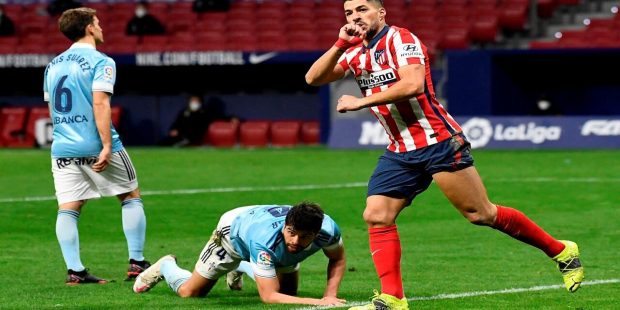 Our Saturday column thinks the price on Luis Suarez to score for Atletico Madrid is too good to turn down.

Atletico Madrid will be an angry side after letting Man Utd off the hook in the Champions League, but they get another home game on Saturday to shake that disappointment off.

Not that it’ll be easy against a Celta Vigo side unbeaten in five and with a decent away record, especially with Diego Simeone probably making a few changes.

Atleti have this game and two more before the return Champions League tie at Old Trafford and he’ll be keen to have his full squad available for that trip to Manchester.

Antoine Griezmann got 15 minutes against Man Utd as he returns from a lengthy injury and he’ll see time again, but maybe not from the start.

This looks a gret opportunity for Luis Suarez to get a start, as he did in their last La Liga game against Osasuna when he scored his ninth league goal of the season.

So the 5/4 price on Suarez to score anytime here at the Wanda Metropolitano seems too good to turn down.

Suarez has four goals in his last five starts for club and country and will be keen to make his bid to get some kind of game time at Old Trafford for that crucial Champions League tie.

The best way to do that is to score goals, and the decent odds-against price for him to continue a decent run of form is well worth taking.

Atleti have scored 12 times in their last six home meetings with Celta and will fancy keeping up that average by putting away a few more chances than they did against Man Utd.