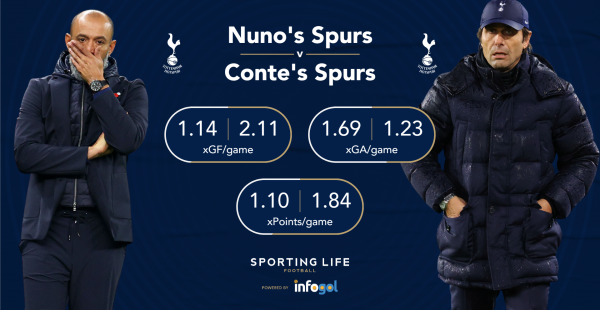 We need to talk about Spurs

Tottenham’s 4-0 win over Aston Villa wasn’t the most perfect of performances, but it was an incredibly clinical one, netting four times from chances equating to 0.85 xGF.

Tactically, the early goal helped them greatly as it allowed them to sit back and counter-attack – something we know they do extremley well.

Nonetheless, Antonio Conte has really got Spurs purring, with only Liverpool, Manchester City and Chelsea posting better underlying numbers than Tottenham since the Italian’s arrival.

I really don’t think Spurs and Conte have recieved enough credit for the turnaround in their fortunes, and importantly, their process.

Their xGD per game of +0.88 under Conte, if maintained over a 38-game season, would rank the team 13th best out of 160 Premier League teams Infogol has seen since data collection began.

Hopefully that puts into perspective the current levels of this Tottenham team.

And let’s not forget, Conte took over a team who were performing like a relegation threatened side… 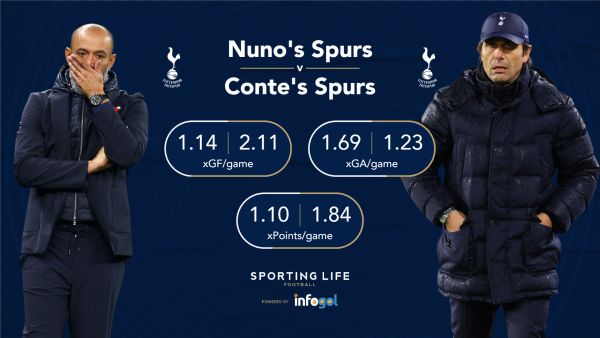 Their xG process under Nuno Espirito Santo was -0.55 xGD/game. So Conte has improved them by around 1.43 xGD/game. That’s staggering.

As is the fact that, a Nuno-led side over a full season would have been expected to collect 28.1 fewer expected points (xP) than a Conte-led side for a full campaign.

That’s an incredible difference, and highlights both how bad things were under the Portuguese manager, and how strong Spurs have been under the Italian.

A hosting of Brighton on Saturday gives Spurs the opportunity to move six clear of Arsenal in the race for the top four, for a few hours at least.

Brentford have hit some incredible form of late, winning four of five and deserving to win all five based on xG.

Results were always going to come for Thomas Frank’s side, who have occupied a top half spot in Infogol’s xG table for the majority of the season, and once the difficult fixtures were out of the way, they have thrived.

They had to play five of the current top eight in the space of six games, plus a resurgent Newcastle as the other match in that run, so there was a reason behind their poor run of form – a tough schedule.

In calmer waters, they dispatched Norwich and Burnley with aplomb, before surprising everyone against Chelsea and then comfortably beating West Ham – with both of those sides having one eye on European commitments.

Nonetheless, the Bees are the sort of team other sides won’t want to play across the closing weeks, as over their last five league games they have averaged 2.03 xGF and 1.00 xGA per game – that is a top four level process.

Any team who can only manage to generate 0.80 xGF against Everton is one that we should be concerned about.

That was exactly the figure Manchester United put up last weekend in defeat at Goodison Park, a shocking performance that has rightly earned them plenty of criticism.

Have they thrown the towel in? Are United’s players now, as they say, ‘on the beach’?

Potentially. Though, with it likely that Ralf Rangnick is ‘moving upstairs’ at the end of the season, you would have thought the players would want to impress the man who is rumoured to be making the footballing decisions next season and beyond.

That isn’t what we are seeing on the pitch at all.

United, with all the ‘attacking talent’ they have at their disposal, have mustered just 0.97 xGF per game across their last four matches.

In the four games prior – when they were right in the hunt for fourth place – they averaged 2.49 xGF per game. 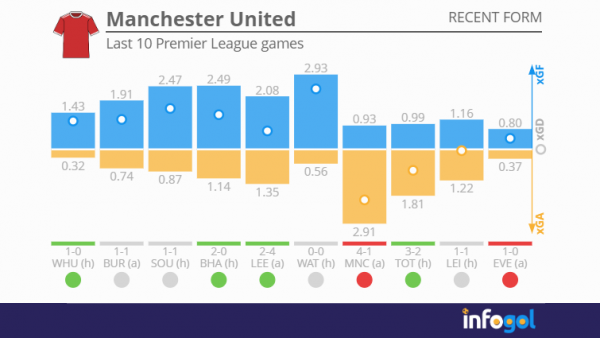 The four before that was 1.73 xGF per game. Their current levels are simply unacceptable, and their current process won’t see them win many games from now until the end of the season.

Perhaps one of those games will be this weekend, as they host bottom side Norwich, but even against the Canaries, why would anyone bring themselves to back United at 1.26…?

Highs and lows for Clarets

We know things can change quickly in life, and football is no different, as Burnley found out last week.

They went from beating Everton, to losing to Norwich, and the relegation probabilities were up and down all week.

Heading into the showdown with the Toffees, Infogol calculated that Sean Dyche’s side had a 57.8% chance of relegation.

After beating Everton on Wednesday night, their chances of going down were reduced by over 20% to 37.2%.

However, defeat to bottom side Norwich, coupled with Everton’s win over Manchester United saw their relegation probability nearly double, up to 68.9%. 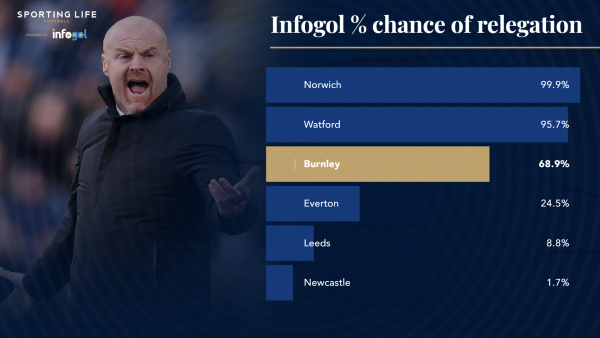 Burnley now face a stiff uphill task to survive, and while it may seem unlikely, the last week has shown just how quickly things can change, so it isn’t over just yet.

However, if the Clarets are going to stay in the top flight, they really need to up their game, particularly away from home.

Dyche’s side have averaged 0.88 xGF and 1.80 xGA per away game this term as they head to the London Stadium to take on West Ham.

It is therefore no surprise they have won just one of 15 league away games this season, and if they are to survive, it is highly likely they may need to at the very least double that tally, if not triple it…