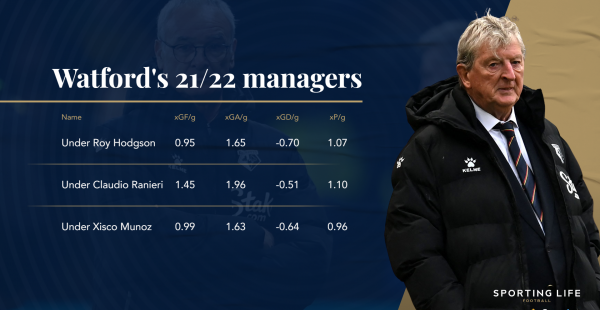 Burnley head into the weekend two points clear of the relegation zone, with an incredible opportunity to extend that lead when they treavel to sorry Watford – more on them later.

The Clarets have had a remarkable turnaround since sacking Sean Dyche, picking up seven points from nine, and in turn seeing their chance of relegation drop to 32.4% according to the Infogol model.

The key to success? Playing a more attacking brand of football.

They are playing with more freedom in forward areas, and are creating more and better chances because of it – 1.97, 2.77 and 1.27 xGF in three games under Michael Jackson.

If they can maintain that level of attacking production for the remainder of the season, we can expect more wins for Burnley.

A trip to Watford at the weekend is a great opportunity to do just that. The Clarets can be backed at a whopping 2.80 on the Exchange, which looks too good to turn down.

The early kick off this weekend features Newcastle and Liverpool (much to Jurgen Klopp’s dismay), and just so happens to be two of the league’s form teams going head-to-head.

Liverpool have won 12 of 13 in the Premier League, while Newcastle have won their last four straight, and welcome the quadruple chasers to St. James’ Park, a place they have won six straight.

In fact, the Magpies have lost just one of 12 at home under Eddie Howe, averaging 1.58 xGF and 1.27 xGA per game in that period.

If we take into account both home and away games since Boxing Day, only the traditional ‘big six’ have collected more expected points (xP) per game than Newcastle.

This is arugably Liverpool’s toughest remaining league game, but they are performing to immense levels currently, making every victory look oh so easy.

Away from home the Reds have averaged an impressive 2.33 xGF and 1.26 xGA per game, so will almost certainly create some chances here.

Now, I’m not saying Newcastle will get a result here and derail Liverpool’s title challenge, but they will certainly make life very difficult.

The Magpies can be backed at 1.80 on the Exchange with a +1.5 goal headstart on the Asian Handicap, which looks a steady play given how well they have been playing.

Norwich can be mathematically relegated this weekend, and while that isn’t the case for Watford, a defeat to Burnley would be the final nail in an already tightly sealed coffin.

Unfortunately for the Hornets, the appointment of Roy Hodgson hasn’t seen their fortunes take a turn for the better, with his defensive brand of football not seeing them create enough chances to pick up a lot of wins.

In his 13 games in charge, Watford have won just twice, losing nine, while posting underlying numbers that read; 0.95 xGF and 1.65 xGA per game. 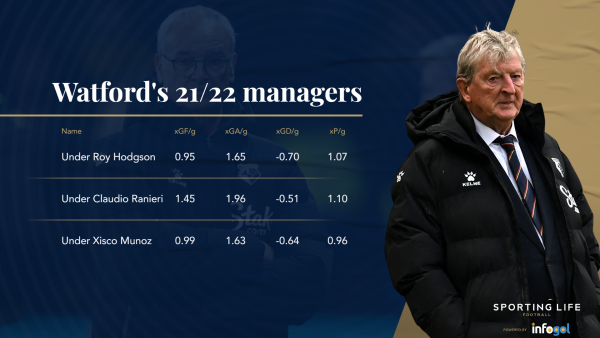 Those underlying numbers are in fact the worst of any Watford manager this season, with even Xisco Munoz (remember him) posting a better xG process.

In hindsight, sticking with Claudio Ranieri may have been a better option than switching to Hodgson, as while Watford’s underlying process was still negative, they were at the very least creating chances – an important thing for any team who want or need to win football matches.

The fall from 1.45 xGF per game under the Italian to just 0.95 under Hodgson is drastic, and a massive contributor to why they find themselves in such a predicament.

It really is last chance saloon at the weekend as they host Burnley, but why would anyone be backing this Hodgson-led Hornets team in any game?