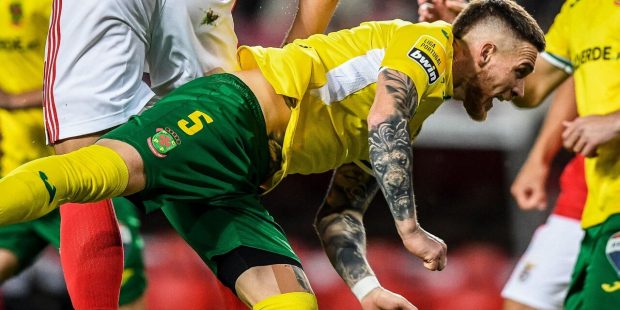 The football props column – now over 38 points in profit – kicks off the week with an 11/4 player card bet which has landed eight times out of 21 so far this season. Andy Schooler has the details.

“No side commits more fouls per game than Pacos, while we’ve also got a referee who’s been happy to show cards in Hugo Silva. He averages 5.29 yellows per game and almost one red per match.”

A fairly limited fixture programme on Monday sends us off to Portugal for an 11/4 player card bet.

Backing visiting left-back Vitorino Antunes to be shown a card has plenty to like about it.

Overall, these two sides are both in the top eight for yellow cards received in the Primeira Liga, while the league table also suggests this should be a hard-fought affair with the duo separated by just six points.

In terms of fouls, no side commits more per game than Pacos, while we’ve also got a referee who’s been happy to show cards in Hugo Silva. He averages 5.29 yellows per game and almost one red per match having produced six in his seven games so far this season.

Well, the primary reason is his card history this term – eight bookings in 21 starts in all competitions.

Then there’s the fact that if, as expected, he lines up at left-back, he’ll likely be up against Estoril’s top dribbler, Chiquinho.

The Brazilian likes to run at defenders and having recently returned to the starting XI, he should cause Antunes problems.

All things considered, 11/4 looks a decent price here in a match you can watch live on Betfair Live Video.

Transfer Deadline Day Live: Latest news and odds on all the big moves