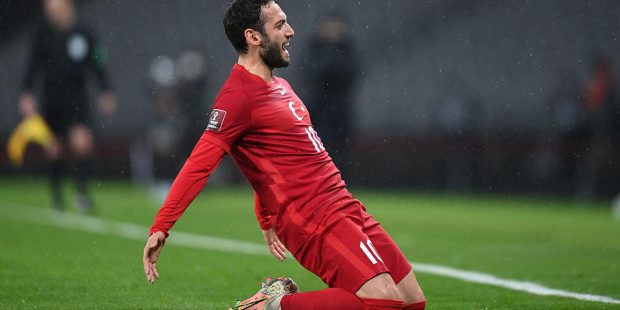 Our props column has picked out Hakan Calhanoglu as a value play for a booking in the Derby d’Italia on Wednesday.

It’s the perfect fixture for the Italian Super Cup as Serie A champions Inter Milan face Coppa Italia winners Juventus in a bonus Derby d’Italia showdown for the first piece of silverware for the season.

The two most successful clubs in Italy will scrap it out at the San Siro in a game that’s always a must-watch – let alone when there’s a trophy up for grabs.

Inter sit on top of Serie A after extending a 12-game unbeaten league run with eight straight wins, while Juventus sit in fifth after five wins and a draw in their last seven.

Juve have had the better of the recent skirmishes, losing just one of the last 12 meetings (W7 D4) so they’ll be confident of extending their record with a 10th Supercoppa title. The Old Lady have been in the last nine finals, winning five.

Goals could be on the menu here, as both teams have scored in three of the last four, but there’s also a history of cards being dished out in this fixture.

And with a trophy being on the line you can expect to see plenty of yellows being brandished on Wednesday night.

Just in the last four meetings alone there’s been 27 yellow cards and three reds with two games seeing nine yellows or more – that’s some going even for a high stakes fixture like this one.

Total cards are priced up accordingly as are several of the usual suspects, but one man who looks like a slice of value is Turkish playmaker Hakan Calhanoglu.

Hakan is 4.03/1 to see yellow and the fact he’s returning from a suspension is a good sign – for us at least!

He’s been doing everything for Inter of late, with four goals, five assists and three yellow cards in his last nine games, with back-to-back bookings putting him on to five for the season and bringing a suspension.

Although players are usually well behaved when returning from a ban, Hakan is playing against Juventus in a cup final, so the change of competition and the extra pressure of the big occasion will surely see him getting stuck in again.

At the price he’s well worth a try.