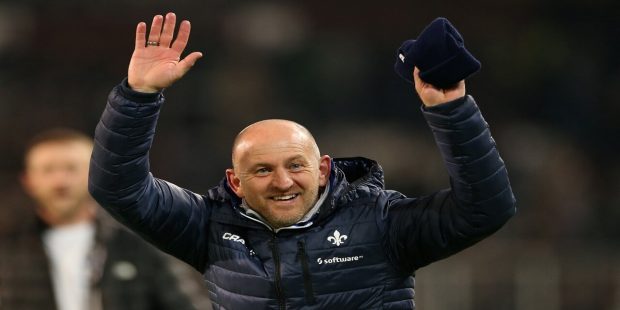 After picking up a winner in the German Bundesliga 2., Kev’s looking for another odds-against success.

While Thursday’s bet gave us a late kick in the teeth, Friday’s bet paid for our dental bills, as Nürnberg’s last-gasp leveller at St. Pauli gave us a winner. We’ll stick with the German second tier, because promotion-chasing Darmstadt are up against an Erzgebirge Aue side that’s already been relegated.

As Greuther Fürth showed in last night’s 1-1 Bundesliga draw at top-six side Union Berlin, a side that’s playing without pressure can perform well, and Aue’s relegation seems to have set them free. Their last two matches have seen them win 2-0 at Heidenheim and draw 2-2 with Hansa Rostock, and they have avoided defeat in four of their last eight games.

All of the pressure is on Darmstadt, who know that a win would take them into the automatic promotion places with just two matchdays remaining. The Lilies have had a superb season, but like many of the leading contenders, the strain of the promotion race has taken its toll. Darmstadt have won just four of their last 11 games in the league, and at home they have won just two of the last eight.

We can give Aue a goal-and-a-half start here on the Asian Handicap at 2.1211/10, and that seems a worthy play to me. Darmstadt have only won by two goals or more in three of their last 17 games, and they have all of the pressure.