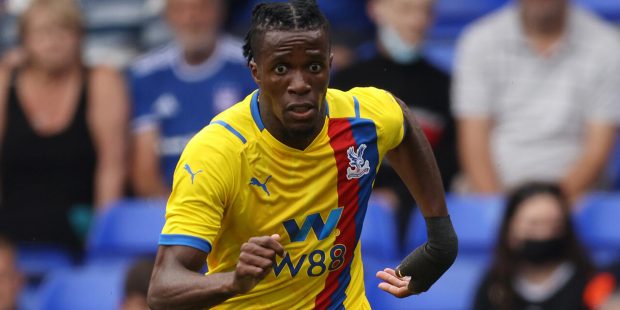 Wilfried Zaha has a remarkable record for being carded against Watford and the Crystal Palace star looks a good bet to repeat the trick on Wednesday.

Heard the one about Wilfried Zaha and Watford? Well, if you haven’t, listen up.

The Crystal Palace forward has been booked in six of his 10 Premier League appearances against the Hornets, including on all five trips to Vicarage Road.

He’s collected more cards against Watford than any other side in his career and that’s not a co-incidence.

He’s been booked on multiple occasions for diving against the Hornets and their fans remember that.

Well, perhaps they most remember their mascot, Harry the Hornet, mimicking Zaha with his dive on the touchline in 2018. Whatever, Zaha will be assured of another hot reception on Wednesday night.

And the thing is, he’s not the sort of player who deals with that too well – don’t be surprised to see him putting himself about a bit and generally getting frustrated.

Watford seem unlikely to help. Roy Hodgson is now in charge and as a former Palace manager will know exactly how to disrupt Zaha, who is the Premier League’s most-fouled player (on a fouls-per-game measurement).

So far this season, Zaha has been carded in four of his 19 league starts which is a decent foundation for this bet.

Ref Andre Marriner also isn’t bad. He’s upped his card count this season and currently is ranked 10th for yellows having shown at close to four per game – above the average.

Marriner also happens to be the official who sent off Zaha off at Southampton a few years ago – you may remember the incident. Zaha retaliated to the fouling he was receiving, was duly booked, and when he then sarcastically applauded the decision, he was dismissed.

Marriner could be busy here. Watford commit more fouls than any other Premier League side and Palace sit fourth in that list.

Basically there’s plenty to like about Zaha being shown a card and odds of 11/4 may have under-estimated the chance of that occurring.

Wednesday Cheat Sheet: All the best bets in one place!