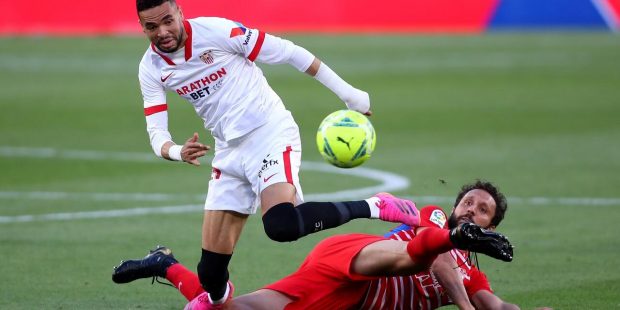 Paul Higham returns with our props column on Monday looking at a bookings double for a big relegation six-pointer in La Liga.

Granada have lost five in a row and are winless in their last seven so now sit just three points outside of the relegation zone.

Cadiz are sitting in the drop zone, second from bottom, but have only lost one of their last five and a win would put them just a point behind Granada and pile on the pressure on their opponents.

So it should be a game full of tension, full of nerves, and hopefully for us full of tough tackles and bookings.

Both teams are in the top eight in terms of total bookings in La Liga this season, and they also have a few fiery customers in their ranks that are card candidates given the enormity of the game.

Granada defender German Sanchez is one such man, with seven bookings to his name including seeing yellow in his last two games.

Cadiz defender Juan Cala is another player who gets stuck and is a regular in the referee’s notebook – having been booked eight times this season.

Cala has also been sent off twice and was booked in the first meeting between these two this season.

He’s highly likely to find the occasion too much for him again.