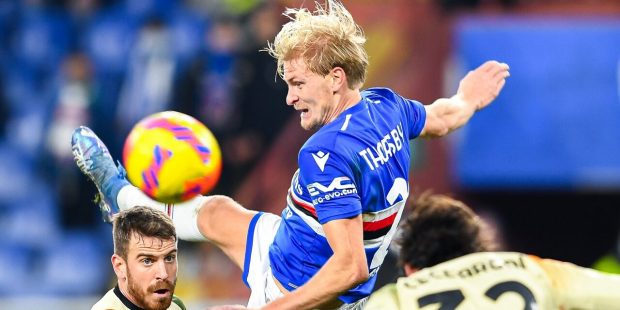 After another profitable week, our football props column has a 9/1 cards bet for Monday’s action in Serie A.

“The Norwegian midfielder has 10 cards in 28 appearances this season and only two players in Serie A are averaging more fouls per game than his 2.4.”

Last week was another profitable one for this football props column and we’ll kick off the new week off by eyeing up a tasty 9/1 cards double.

With both sides firmly in the bottom half of Serie A’s fair-play table (only two teams have collected more yellow cards than Sampdoria) and the pair separately by only five points in the league standings, this has the potential to be feisty and competitive.

We’ve also got a referee averaging over 4.5 yellows per game, while Luca Pairetto has also shown three reds in his 10 games this season.

Therefore it’s off to the ‘player to be shown a card’ market where I’m going for one from each side.

First up is card regular Morten Thorsby for Samp.

The Norwegian midfielder has 10 cards in 28 appearances this season and only two players in Serie A are averaging more fouls per game than his 2.4.

He’s 17/10 for a card in this game. He was pushed to the left last week and if he remains in that position here he may well come up against Scot Aaron Hickey, who happens to be Bologna’s most-fouled player (2.2 per game).

That looks a clash well set up to produce a card.

For Bologna, Adama Soumaoro looks the value at 13/5.

The centre-back has seven cards in 20 starts this term. Add in four in the last 11 games of last season and he’s been carded in 11 of 31 – a similar ratio to Thorsby but at a better price.

In this game he’ll likely get a tough physical battle against nine-goal centre-forward Francesco Caputo, while Abdelhamid Sabiri’s runs from midfield will also be awkward to deal with – the Moroccan is Samp’s most-fouled player.

Put the two together via the Bet Builder feature and you get odds a tad shy of 9/1.